The typical SCADE mobile projects has the following structure

If you reference the file directory structure in code, always assume M1 as your home. That means to access an image dog.jpg in the res folder, you would use res/dog.jpg as the path

The start.swift file contains the swift code that is executed when the application is started.

The build file contains important information that is used during the build process:

Building an app for iOS

To build for iOS, the most important prerequisite is that you provided the necessary keys for iOS code signing. See Code signing settings for setting up the keys.

The M1.ipa is now ready to be uploaded to iOS:

Additionally, the Scroll Lock issue might cause some irritation as the final log output is not shown. See here for more information Console Scroll Lock

The AppId that is generated for the app is following the naming structure com.scade., so if you have a project named MyMobileProject, the app id is com.scade.MyMobileProject. We don't have the ability to set the AppId manually, but looking into adding this shortly.

Building an app for Android

To build an Android app, make sure SDK and NDK are configured as described here Configure Android support

Use can use right click and Open with ... System Editor to open the build file. Use Command + F to search for text.

The steps to set the release mode are simple

To set the mode, open the build file and change the buildType setting to either Debug or Release. Best to do this for both x86 and Arm processor

Create a text file and call it keystore.properties. Add the following content. Make sure the storeFile entry points to the keystore file you created.

There are 2 ways to set Android APK version:

Look at example of Android Manifest along this path:
/.build/android-x86(armeabi-v7a)/-android/AndroidManifest.xml 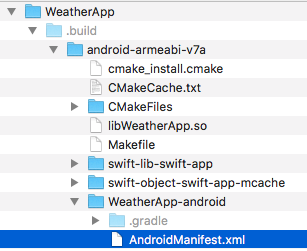 Hi, we will add this to the IDE shortly, but to upload the apk to your Android, the easiest way currently is to use the adb command

Updated over 3 years ago