The layout manager houses and handles all kinds of controls in a precise fashion on a mobile app page. It automatically adapts to the respective screen size and therefore achieves device format independently. The layout manager makes use of layout containers to display mobile pages.

There are some shared attributes across all four layout containers. These shared properties can be found and configured in the layout panel located on the right side of the IDE:

The padding settings define the space between the layout container and its content. Increasing the padding value moves the content(s) of the container inward. The values are absolute values in points: 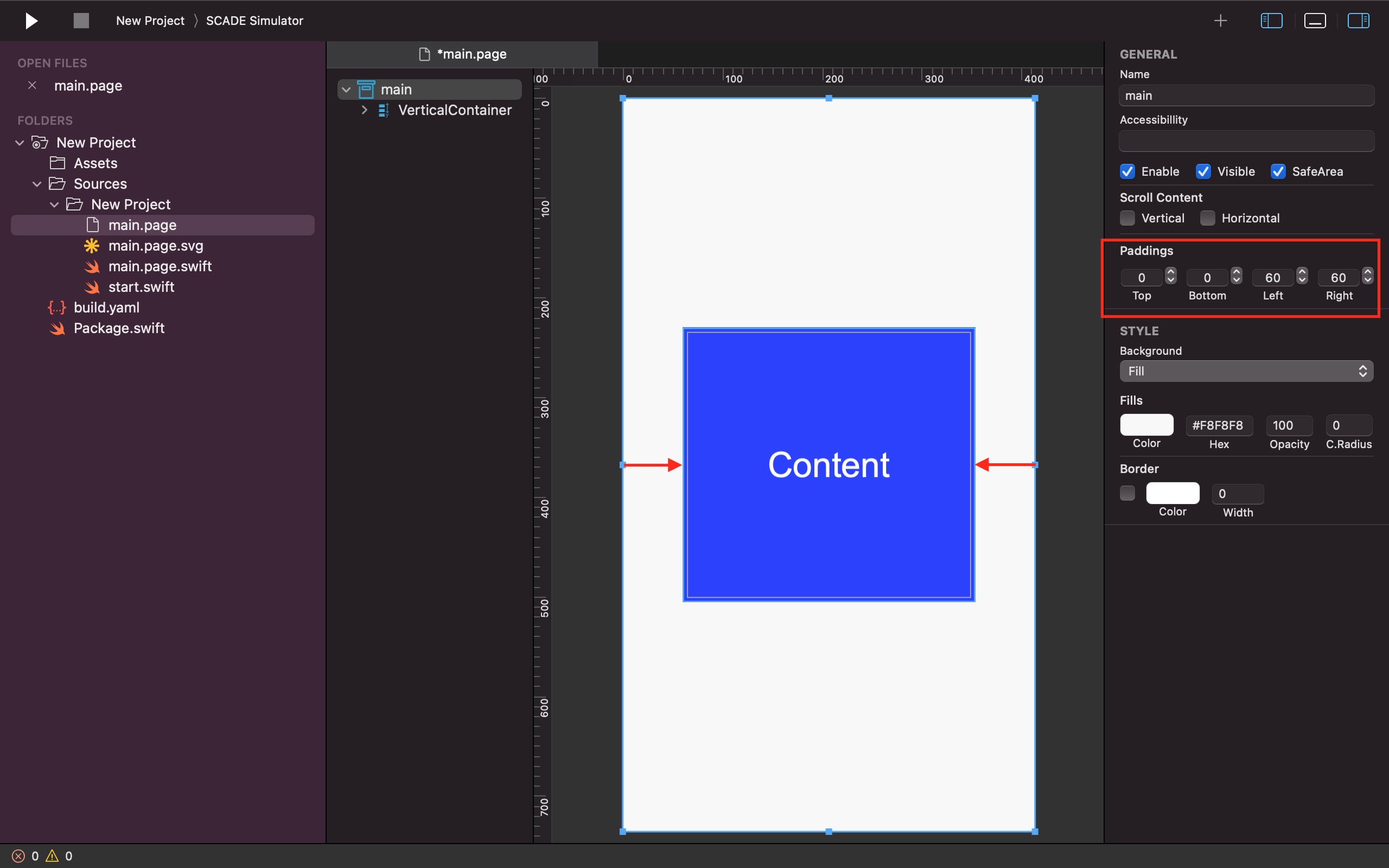 This property defines the distance between controls and layout containers in a given container.

You can add a scrolling functionality within a container through the layout panel. The Scroll Content feature has two parameters - Vertical and Horizontal. You check the Vertical parameter to give a layout container the ability to scroll vertically, and you also have the option to select the Horizontal checkbox if you want the effect horizontally: 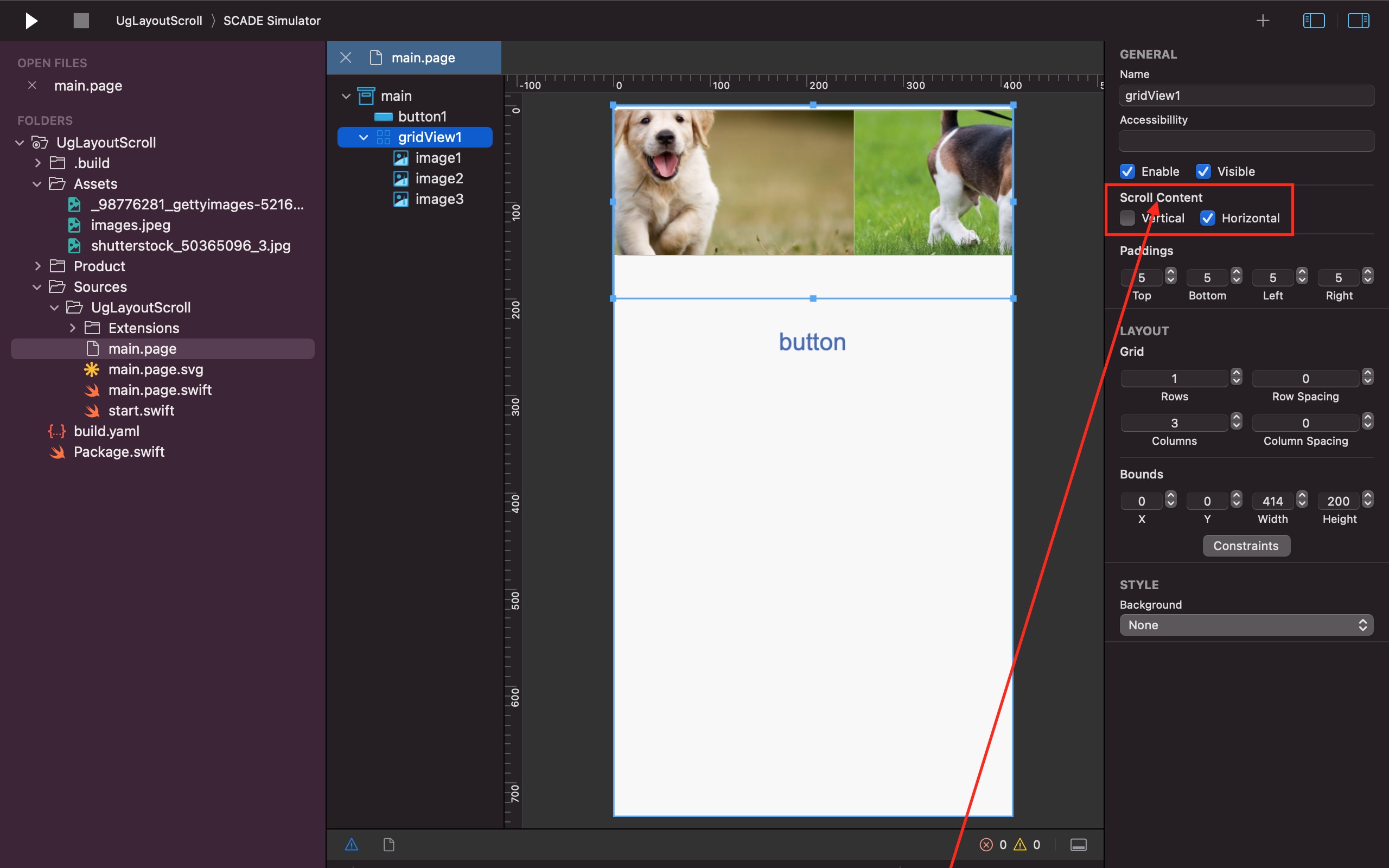 How to Scroll to a particular Position

To scroll to a specific position, let in our case, scroll to the middle of the scrollbox, we: 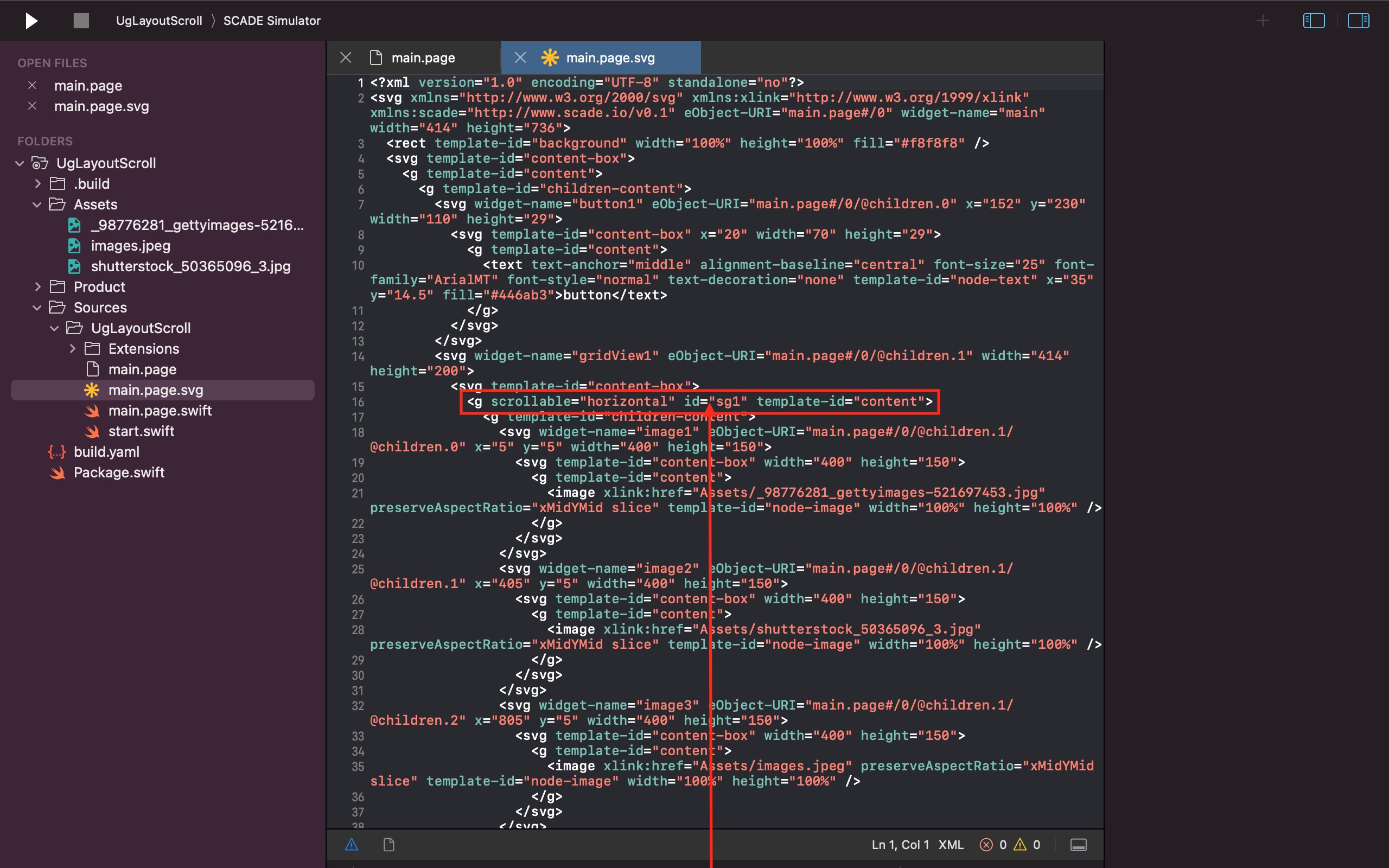 A bounding box is a very important concept to understand layout behavior. Bounding boxes are used in all kinds of graphic tools (Adobe, Sketch, etc.).

A bounding box is a rectangle that encloses visual controls, i.e., containers or widgets (such as a horizontal layout container, labels, buttons, and so forth). It defines the area in which an item can be placed.

Basically, a bounding box can have three sizes:

The Wrap/Fill feature, located in the layout panel, controls the behaviour of bounding box . You can use its elements to configure the size and position of a bounding box and its child.

The bounding box of an item will extend itself in a vertical or/and horizontal direction until it reaches the borders of its parent container if the maximum size bounding box is chosen.
And if you choose the minimal size, the bounding box will always be the size of its visual control:

Also, you would be restricted from moving visual controls around if you expand a bounding box's child to reach the borders of the bounding box's parent container:

Some Important Facts about the SCADE Layout Manager 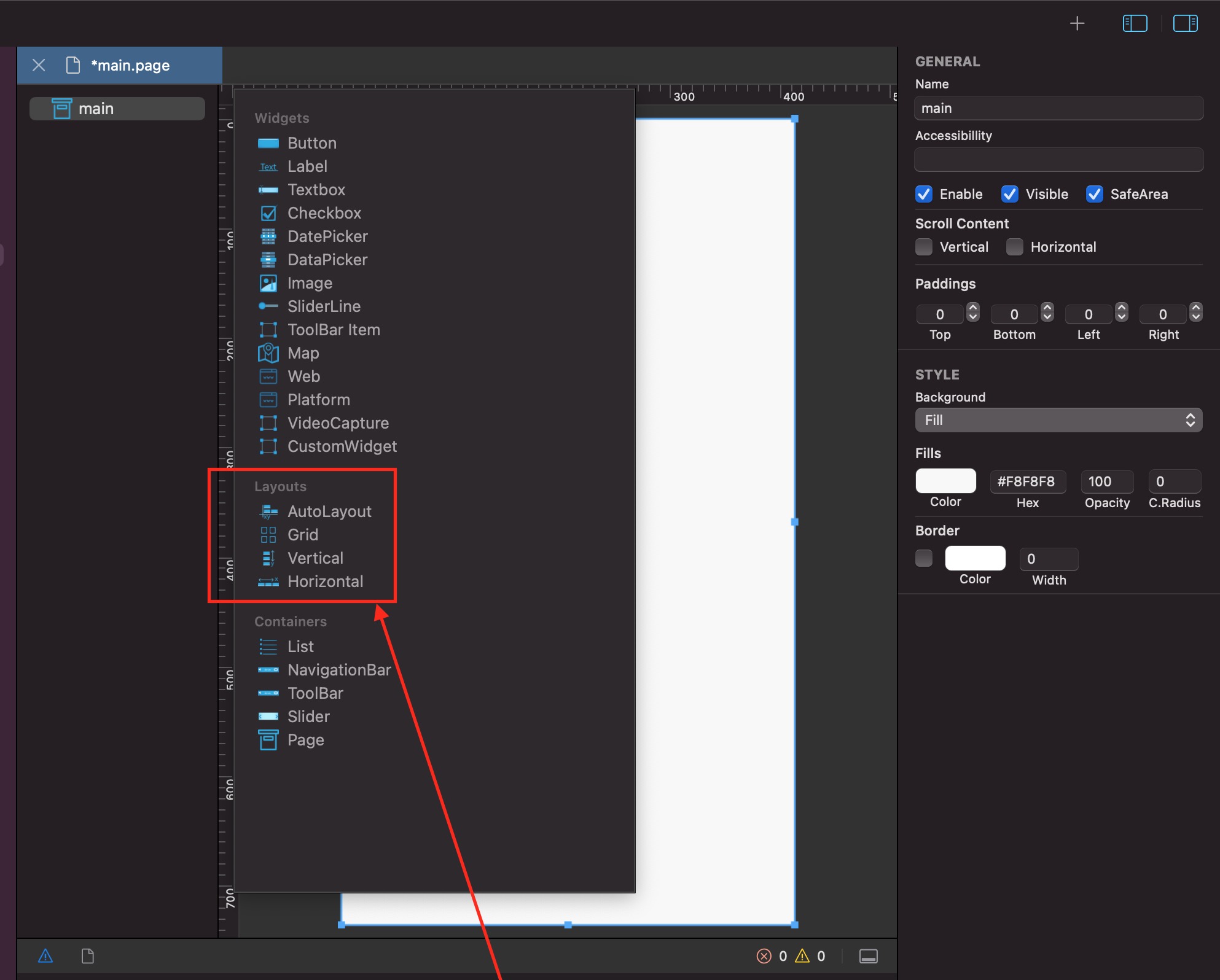 The autolayout allows pixel-perfect placement based on the coordinates of its items. It produces a user interface that can adapt to numerous devices and orientations automatically. Additionally, it's also highly sensitive to changing situations because of its adaptability and versatility.

However, Autolayout doesn't use layout concepts such as alignment and fill-space, unlike other layout containers. Interestingly, it dynamically calculates the size and position of controls based on the respective constraint values you set for these controls.

This short video places a label at each corner of an AutoLayout root container (main page) to demonstrate how to achieve a simple AutoLayout design:

Here's how the Simple AutoLayout Design look in both Android and iOS Simulators:

Items in the GridLayout are arranged across two axes in a grid-like style. The grid layout can be the root container of a page that houses other inserted layout containers. Items inside a GridLayout can be other layout containers or user controls such as labels, buttons, list controls, and so forth. A grid comprises a number of rows and columns. A grid layout expands dynamically when we add more items inside it. For instance, adding a new label below an existing label in the last row of a grid creates a new row.

Some noteworthy details of the Grid Layout

The grid layout is an excellent UI design format that divides the screen into rows and columns to form an n x m matrix of cells.

Here is a brief video demonstration of how to use SCADE's Grid Layout:

The following screenshots show how the Simple AutoLayout Design appears in the Android and iOS simulators:

The vertical linear layout arranges items on top of each other. The vertical linear layout, unlike the AutoLayout and the GridLayout, cannot serve as a page's root container, but it can also be set to include other layout containers and user controls (such as the list control, button, textbox, and so forth). Notably, it has almost the same features as the GridLayout except that it only comprises a number of rows.

The horizontal linear layout does the opposite of the vertical linear layout. It also can't stand as a page's root container, but it can depend on its column property to arrange items such as layout containers, labels, buttons, list controls, and so forth next to each other in a group within the layout. 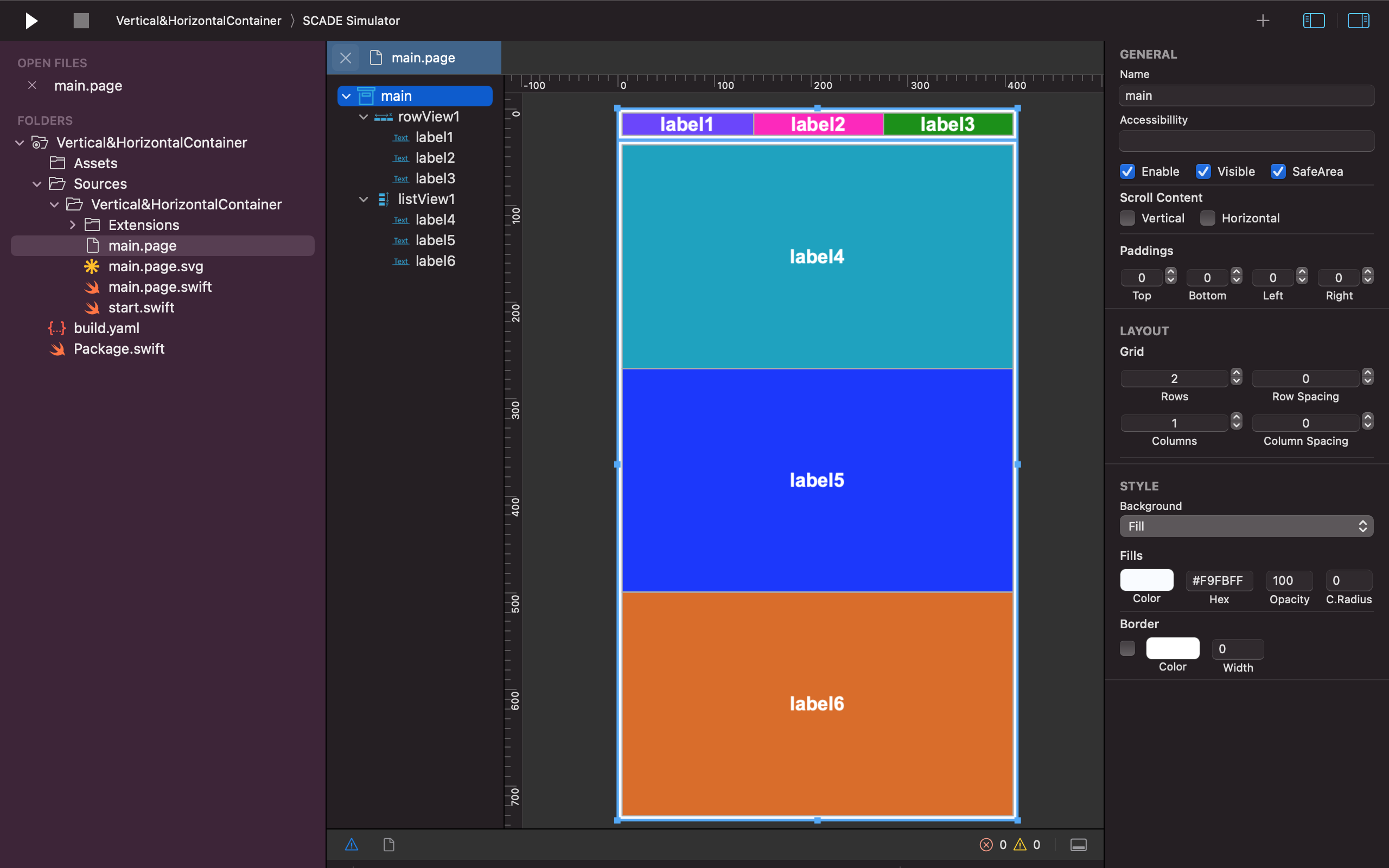